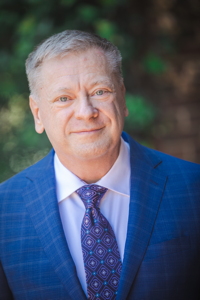 Tim Hendrix (he/him/his) is an Associate Professor of Mathematics in the Department of Mathematics and Computer Science at Meredith College.  With almost 30 years in mathematics education, Tim has had the opportunity to teach and work with hundreds of pre-service teachers and in-service teachers in teacher education programs and in professional development.  His scholarly focus has been on how students transition to advanced mathematical thinking, curriculum development, and the use of technology for conceptual understanding.

In 2002, Tim was the first Project NExT Fellow sponsored by AMTE and became involved in AMTE soon thereafter. He received the 2005 NTLI Fellowship Award and has been involved in service to AMTE in a variety of ways over the years. He served two terms as Chair of the Membership Committee, chaired the redesign of the AMTE website, was appointed as the first AMTE Website Director, and served the organization six years as Executive Director.  He has been a consultant for the STaR Fellows Program multiple years, and currently serves both as a Change Agent for the AMTE/Get the Facts Out Task Force focusing on teacher recruitment and as a facilitator of AMTE’s Community Circle for MTE’s at smaller institutions. In the last year, the College Board of Mathematical Sciences (CBMS) asked Tim to serve as one of three co-authors for a diversity, equity, and inclusion position statement to be considered by CBMS and its member societies.

Tim has been involved with multiple mathematics-science partnership grants, as PI for the STAMP grant, and as a higher education mathematics content specialist for the TEAM II, Partners for Mathematics Learning, TAP Math, Navigations, and Project Lead grants, delivering professional development to hundreds of elementary, middle, and secondary mathematics teachers in North Carolina.  An active member of NCCTM, Tim has served multiple offices on the NCCTM Board of Directors, including Eastern Region President and Statewide Vice-President for Colleges and Universities.

At Meredith College, Tim teaches a wide range of courses in mathematics and mathematics education, and is the mathematics licensure program director.  He is also currently co-chair of the College’s Tenure and Promotion Committee and a co-PI of the NSF-funded S-STEM Scholarship Program, Advancing Women’s Education in STEM (AWE-STEM). He has served in a variety of campus capacities, including chair of the Faculty Council, and Director of the college’s 2010 Quality Enhancement Program, PRISM, a focus on critical thinking in both the curricular and co-curricular programs.  He loves to teach in and support Meredith’s Study Abroad Program in Italy. Whether in the classroom with pre-service teachers, in professional development spaces with in-service teachers, or in mentoring roles with fellow mathematics teacher educators, Tim is most happy in a learning community, where all can work, learn together, and support each other’s mathematical thinking in a safe space.