Advocacy Efforts by AMTE Affiliates: Looking Back on Lessons Learned and Looking Ahead Toward Increased Impact

In 2016, the Hoosier Association of Mathematics Teacher Educators (HAMTE), the Indiana affiliate, surveyed its members to identify issues around which they were interested in doing advocacy work; this led to the formation of teams focused on PreK-12 Curriculum & Standardized Testing, Mathematics Teacher Recruitment & Support for Public Education, and Teacher Licensure Testing. In spite of the best intentions, these efforts never really got off the ground – this led to conversations among HAMTE members about how best to do this work, and ultimately, to a 2017 AMTE discussion session, “Advocacy Efforts by AMTE Affiliates,” grounded in a challenge from Bea D’Ambrosio (2014) for AMTE members to “understand how our identities as teachers, scholars, moral and social human beings are reflected in our practices.” This article includes a summary of that discussion, an example of advocacy efforts from the Association of Mathematics Teacher Educators of North Carolina (AMTE-NC), and next steps that affiliates might consider to increase the impact of their efforts.

In preparation for the AMTE discussion session, HAMTE sent a survey to the presidents of AMTE affiliates asking about their advocacy efforts and collaborations. Ten presidents responded and the issues mentioned most often were: K-12 State Mathematics Standards and Assessments; Elementary Mathematics Specialists; and Teacher Education Issues, including Licensure Testing, Recruitment, and Mathematics Content Courses. When asked with whom they had collaborated in their efforts, the most frequent responses were: state departments of education, NCTM affiliates, state/national mathematics organizations, other university departments, and school districts. These survey results were shared with participants at the discussion session, which included representatives from Florida, Indiana, Kentucky, Pennsylvania, Texas, and Virginia. When asked to identify their own advocacy issues, the discussion participants concurred with the issues reported in the survey and added several state-specific issues related to teacher preparation and teacher contracts emerging from their legislatures.

When asked how those involved in mathematics education and mathematics teacher education might better collaborate, the discussion turned to a focus on the distinction between reactive advocacy (responses to issues that arise within the state, often in the legislature or the department of education, and usually within a short timeframe) and proactive advocacy (long-term formation and implementation of strategies for communicating with individuals in these state legislative and policy-making bodies). Participants acknowledged the need for AMTE affiliates to respond to emerging issues in systematic and timely ways and establish ongoing relationships with other individuals and organizations. The group also brainstormed a list of extant advocacy resources (the authors hope to share this list on the AMTE website soon). Several participants cited the exemplary advocacy work of AMTE-NC, whose efforts are described in the next section. The discussion ended with a return to Ambrosio’s reflection upon the fact that advocacy is often mentioned in our affiliate mission statements, but it is unclear what it looks like and what we actually do about it in our work.

Academic Standards Review Commission: In 2014, following vocal criticism of the Common Core State Standards NC had adopted, the state legislature formed the Academic Standards Review Commission (ASRC) to begin a review of the English and mathematics standards. The mathematics sub-committee of ASRC quickly took a position against the mathematics standards, called in like-minded people to speak to the group, and largely ignored contributions from the North Carolina Department of Public Instruction (DPI) mathematics consultants. By late 2015, the committee recommended replacing the NC K-8 standards with Minnesota standards and replacing the 9-12 integrated standards with previous NC standards (traditional algebra, geometry, algebra II sequence as opposed to the current integrated sequence). After a fierce, collaborative advocacy campaign by NC mathematics educators, the recommendations were not adopted and the Commission voted simply to have DPI supervise a revision of the mathematics standards.

House Bill 657: Only one day after the NC State Board of Education approved revised 9–12 mathematics standards, House Bill 657 was introduced. HB 657 called for a return to the 2003 NC standards and its traditional algebra, geometry, algebra II sequence, for grades 9-12. Overnight, NC mathematics educators rallied against the Bill and when it was introduced in Committee the following morning, it had been amended to give every student the option of the traditional or integrated curriculum. A period of advocacy ensued and that bill was defeated in the Senate and sent to a joint House-Senate Committee, where it died when the legislative session ended.

House Bill 417: Having been thwarted twice, House Bill 417, A Bill to be Entitled An Act to Enact the Actually Get Rid of Common Core Act, was introduced. This Bill did not make it out of the House-Senate crossover day.

In three of the four situations above, the mathematics education community quickly sprang into action, using a set of critical resources and strategies: (a) social media and e-mail messages to spread the word to mathematics educators and sympathetic groups and individuals, (b) e-mail messages to commission members, legislators, and State Board of Education members, (c) phone calls and personal visits to legislators, (d) NCCTM petitions circulated at Annual Conference, (e) NCCTM and AMTE-NC letters to state newspapers and radio stations, (f) attendance at Committee meetings, (g) AMTE and NCTM resources (e.g., strategizing advocacy with NCTM Past President and AMTE President Elect, letter of support from AMTE, NCTM Advocacy Toolkit), and (h) assistance and insider information from the NC Chamber of Commerce and Hunt Institute.

These successful outcomes were at least partially achieved by a relatively small core of mathematics educators and a much larger group of concerned educators and citizens who individually did a little, but collectively did a lot. The nature of the issues meant that the reactive advocacy had to be done in a very short amount of time and often when it was not convenient. However, the time-sensitive nature of the reactive work supplied pressure to get the job done, whereas it can often be difficult to find time to do the type of proactive advocacy work in which Indiana is engaged.

As the history shows, the majority of advocacy in NC has been reactionary due to the constant attention to mathematics by the state legislature. Our preferred mode, of course, is to be proactive; however, reactive advocacy is a reality for many affiliates. We now offer some reflection on the key people and practices that made our efforts successful.

1.     Find a legislative/political insider(s) that can update your organization on upcoming legislation, key elected officials to contact, and potential strategies. This person may be someone at the State Department of Education, State Chamber of Commerce, a hired lobbyist or a university lobbyist.

2.     Create and cultivate a strong state-wide advocacy social network. This may begin with state mathematics organizations like AMTE or NCTM affiliates who take on advocacy as a mission. Organizations that have high teacher and leader membership are crucial for building a network. Sessions at state conferences on advocacy are also critical for establishing shared goals and networks. Creating relationships with State-wide entities like the NC Parent Teacher Organization, NC Chamber of Commerce, Principal organizations, Education Colleges at universities, etc. (see Figure 1) was crucial for calling on multiple voices as certain needs arose. 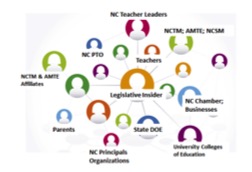 3.     When the advocacy call comes out, create a shared message that can easily be sent to partners and a communication plan. It is important to keep in mind that Representatives listen to the voters in their districts and Senators listen to all voters. Use your insider to determine which elected officials are most important to target. At times, editorials can be crafted by organization leaders and sent to media outlets. Further, it can be appropriate to visit elected officials in person. Key to all of these interactions is knowledge of (a) the legislation being proposed, (b) the key official to contact, and (c) the shared message and potential impact of the legislation.

4.     Keep your messages positive and to the point. Elected officials tend not to read long emails or listen to long messages. However, it is very common practice to log all calls and emails that come into their office. Therefore, volume counts as much as message!

5.     If legislators present data as an argument, interrogate the data to make sure the conclusions are accurate. Keep in mind that elected officials can also be swayed by their constituents’ stories and how their legislation may hurt real people.

6.     Understand who elected officials will listen to. Leverage your relationships with teachers, principals, parents, and community members to advocate for mathematics in your state.

North Carolina is now in a position to focus on proactive advocacy strategies. We recognize that prior standards have been poorly implemented in our state due to lack of resources and shared vision. We have created a research-practice partnership called the North Carolina Collaborative for Mathematical Learning [NC2ML] to build a social network and resource-rich infrastructure to support North Carolina teachers to implement the revised standards. We believe such a coordinated effort among the Department of Public Instruction, university researchers, teachers and teacher leaders around the state will make transitions to revised standards more palpable for teachers who have direct access and messaging to parents. HAMTE members also look forward to continuing their advocacy efforts - they have had the opportunity to learn from the proactive advocacy work of the HAMTE Elementary Mathematics Specialists Task Force in collaboration with the Chair of the Indiana House Education Committee and a group of Indiana principals. We look forward to seeing the results of that work, and we have appreciated the discussion with our colleagues from North Carolina.