The transition from arithmetic to the more abstract representations of algebra has historically been a challenging process for students. Visuals can often facilitate that thought development. NCTM (2000) suggests that virtual manipulatives can allow students to “extend physical experience and to develop an initial understanding of sophisticated ideas” (p. 27). These simple apps typically have students manipulate and explore a dynamic between variables. Virtual manipulatives can be powerful tools for learning, providing significant gains in achievement.

The Center for Algebraic Thinking (http://algebraicthinking.org) has created 20 free iOS apps for iPads that focus on different aspects of the algebra curriculum. One of our manipulatives addresses research by Monk (1992) that students tend to draw graphs that imitate reality, such as a hill, regardless of the labels of the axes (called ‘iconic translation’). The Action Grapher app shows a bike climbing various hills while simultaneously three separate graphs of height, distance, and speed versus time appear alongside. The student draws what she thinks each graph will look like, then animates the bike and compares her hypotheses against the actual graphs that unfold. Included in this app is “Flasks” that challenges students to figure out which graph represents different shaped flasks being filled with water. 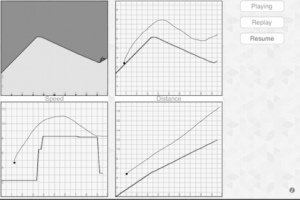 Another app, Algebra Card Sort is based on the MARS tasks from the University of Nottingham (http://map.mathshell.org/tasks.php). In this app, students have to match graphs, tables, and stories, thereby making the connection between each. 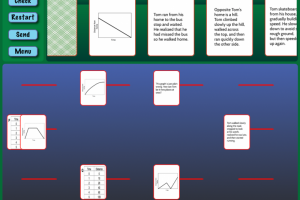 Tortoise and the Hare Algebra

The app Tortoise and the Hare Algebra helps students work on the concept of rate of change. Based on the Aesop fable, students explore the relative speeds of the tortoise and hare by changing how fast they go and how long the hare takes a nap. Students get to see the race animated and then can adjust the rates to see how they affect the race. 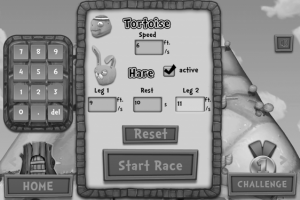 So many apps available these days focus on developing procedural skills by drilling students with multiple versions of the same task and giving them rewards for success.  Yet, there is so much more possibility due to the power of technology. The critical ingredients to apps like these are visual information and the opportunity to explore hypotheses by manipulating variables.  Students are pushed to think critically and make guesses based on what ideas they have and information they see. The reward is not artificial points or smiley faces but a sense of accomplishment for having figured it out. They are great tools for conversation among pairs, small groups, or the whole class. Good apps facilitate thoughtful discussion.

We need more apps like these! If you have ideas for virtual manipulatives, particularly to address concepts in algebra, please contact us at algebrathinking@yahoo.com.