Getting to Know Ollie 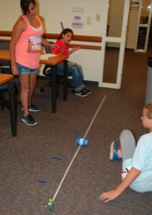 The Tickle app is just one of various applications available that can be used to make multiple types of robots go backwards, forwards, turn, jump, and spin. The app has drag and drop commands, such as “move for ___secs at ___ % speed” and “turn ___by ___degrees,” which users can alter to command their robots.

With just a brief tutorial of the Tickle application, the campers created code to measure Ollie’s distance over time with a constant speed of 30%. (Note: The % power had to be adjusted from our original test runs since the students were running Ollie over carpet versus the original tiled floors. This realization made for an interesting discussion of the rougher the surface, the higher the % power needed to be used to make Ollie move.)

Using a tape measure, the groups found the distance in centimeters Ollie traveled over time, beginning with 1 sec and incrementing every .25 of a second up to 2.5 sec, and recorded their data in a table. Students then plotted their values on a coordinate plane and drew lines of best fit, as well as calculated regression lines. (See Figure 2.) The groups also discussed the ideas of proportional and non-proportional data. From their plotted data, students could reason the graph would contain the point (0,0). 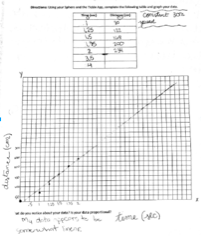 As a second linear activity that built off of their knowledge from the first scenario, we kept the time constant at 2 sec and then examined the distance in centimeters Ollie traveled over % power, starting at 15% and incrementing by 5%.

As could be seen from their excitement and written daily reflections, the campers loved the work with the Ollies and even learned some important mathematics pertaining to algebra concepts they took back to their classes for the fall.